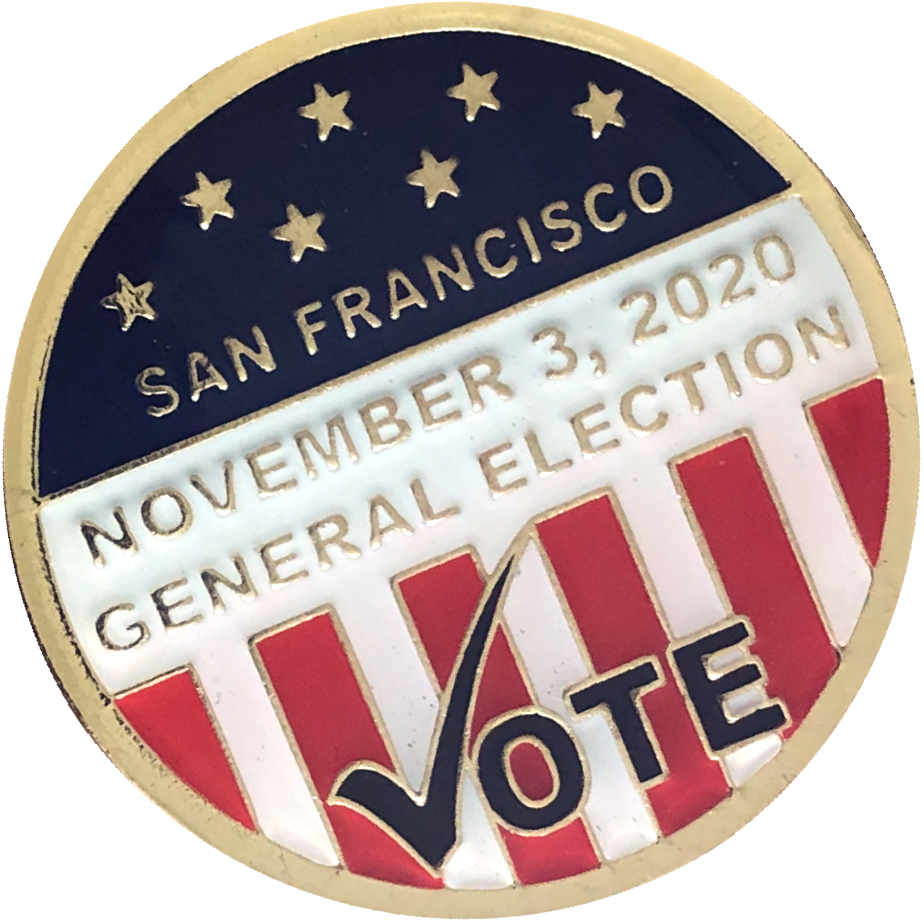 Being a poll worker was great. I think a lot of that had to do with the people I was working with all day (very nice), the precinct I was in (comfortable), and how busy it was (super quiet). It was a good way to be introduced to it, all in all. And I got a shiny new pin. 🙂

We really didn’t have that many people come in to vote, likely due to the big push for Vote By Mail. The vast majority of people were coming by to drop off their ballot. The longest the line ever got was about 5 people deep in the morning, then by about 11am or so there was almost no line at all. It was pretty chilly, unusually windy out and we had to have the windows and doors open all day for ventilation, but that wasn’t too bad.

There were only two frustrating points.

One was an anti masker of sorts. I say “of sorts” because he wasn’t being aggressive about it or anything, was more of a pedant. Basically one of those personality types that gets a bee in his bonnet about something and then complains about it pettily at literally every. possible. opportunity. He stepped in the door with the mask barely covering his lips, and when our greeter gave his spiel about pandemic precautions (as he had to), this guy stopped him and immediately started complaining about security theater. Get a freaking life dude, this is part of our job. Anyways, he was then saying “well why can’t I vote outside?” and we happily were able to say “you CAN, curbside voting is a thing and we’d be pleased to arrange that for you”. We got him going with that and then weirdly, he decided he was ok with the whole mask situation and would come inside to scan his ballot himself? IDK, whatever man. Not a huge deal at all of course, priority is that he’s able to cast his vote, it was just a sort of “ugh” encounter.

The other issue is a bigger problem IMO, a symptom of the way that propositions work in California.

Our precinct was in the lobby of a big apartment complex downtown, so a lot of delivery people were coming and going. One of the delivery people—one of many working for a big gig economy org—got chatting and joking with us at one point, seemed interested that it was a polling place and how it worked. He then said offhand that he had lived in the US for 25 years and had never voted, so of course we were all “OMG you should vote! You can register same-day and cast a provisional ballot.” He was worried about it taking too long but he really only wanted to vote for president and Prop 22, so it could be really quick. He decided to leave and have a think about it but said he might come back after his next delivery. He came back! We got him set up with his ballot, and he balked a bit at how long it was. But we reassured him that he could fill out as much or as little as he wanted.

When he got to Prop 22 though, he got pretty frustrated. The wording is just impenetrable. He told us in plain English what he wanted and asked us whether he should vote Yes or No based on that, but we couldn’t advise him on how to vote since that’s against the law. We could only keep repeating and rephrasing the proposition itself. It was maddening, we knew exactly what he wanted but couldn’t tell him. We got there in the end, but I’m sure it left a bit of a bad taste in his mouth. He was pretty excited when it came to actually casting his vote though, had us take lots of pictures of him which was so sweet.

Who on earth is responsible for wording that proposition? It is delusional to think that your average voter would be able to digest it. And though some of the other propositions were a bit more understandable, most were just as opaque.

I’m all for allowing people to vote on individual propositions, and I understand that there may be some legal reasons that the official wording is so complex, but we’ve got to provide more clearly worded context to voters.

I spoke to a friend in Pennsylvania about this and she mentioned the nonpartisan group Committee of Seventy. Their 2020 Voter Guide and BYOBallot tool was available online for anyone to use, and the guide was also provided with their ballots. The guide contains a plain English statement which is required by the Pennsylvania Election Code.

We could really use something like that here in California.